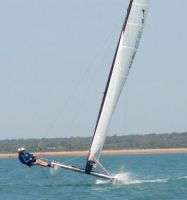 Windrush tornado takes on the world

Brett Burvill and Ryan Duffield have had a great european campain this Australian winter. Taking on and beating the worlds best at the Flens Super Sail event on the Baltic sea in Germany. Brett and Ryan finished first in the event , run as the 'Pre Worlds' beating new world champions Roland and Nahid Gaebler .