Bakewell-White 8 impresses on debut in Perth

'The new BW8 got a good workover on debut in the fresh Perth breeze.' 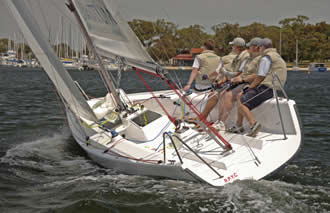 Following the official launch of the new BW8 yacht at Royal Perth Yacht Club’s opening recently, the builder, mast manufacturer and sailmaker, together with several of RPYC’s youth squad have been putting the yacht through its commissioning and testing phase. The boat has seriously impressed those that have sailed her.

Stepping ashore from a session which varied from 12 to 20 knots on Matlida Bay, we caught up with sailmaker Paul Eldrid. 'This boat is really well balanced, it literally sails itself uphill. Even when we deliberately over powered her with a Code 1 jib in 20 knots, we couldn’t lose her upwind. We tried to break the rudder free but it just wouldn’t let go' he said.

The BW8 shows off her sail plan 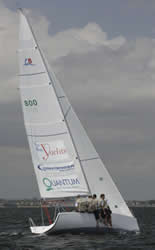 'As a test downhill, we drove her into a big air broach, dumped the sheets, and drove straight out of it. Fantastic! You don’t do that with many yachts quite that easily.'

A very satisfied builder, Peter Milner, added his thoughts. 'The boat has great form stability, good feel and responsiveness, and is very easy to sail. Brett (the designer) really got the design right with this boat. From the sailing we’ve done so far, we haven’t found any bad habits, and there is no misbehaving even in the gusty and wind shear conditions around 22 knots we had the other day.'

Observations from the chase boat and looking over the photos of the test sessions have pleased the project co-ordinators. The ergonomic’s of the walk around foredeck worked well during testing and will be terrific for both training and racing purposes. The simple systems and well positioned layout of the controls make the boat easy for crew through all the manouveres. Downhill the BW8 is slippery, she pops onto the plane early, is lively, and responds well to good downwind helming.

The all round performance, her lines, modern cockpit layout, and the quality of the finished product are a credit to the efforts of WA's leading yacht club's and their design and construction partners in the BW8 project. The yacht well matches the range of uses that are intended by clubs and is also appealling to the private market.

'She is a quick, exciting, and powerful little boat 'perhaps a fraction more so than originally intended by the working party' said RPYC Vice Commodore Mark Fitzhardinge. 'We don’t think that’s a negative, particularly because of the huge amount of interest from local, national and international potential owners since the launch. She may need a small spinnaker added to the sail wardrobe, and the smaller headsail will certainly come into play early for training purposes, and with youngsters and novices. We're delighted with the final product - right on the target of what we wanted.' 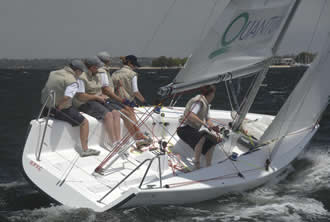 RPYC's order of 6 will see boats 2 and 3 arrive next week. It is understood that RFBYC are close to firming up their order, and that SOPYC will follow after that. There has been confirmed interest from a further 6 private buyers not involved in the clubs' acquisitions. The RPYC purchase program will see the class regularly racing on Saturday's following the completion of their 6th boat in mid December.