If you want to look at some photos of the Edge in action go to Facebook and look for the EDGE page and join in the discussion about the new boat. If clicking on the link does not take you to Facebook, copy and paste the address into your browser.

Check out the Edge page under Sailing Boats!

The EDGE has touched the water

The new F18 "EDGE" has finally made it onto the water. 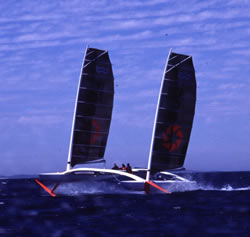 The Windrush built Flying Fifteen as well as having the most comfortable deck layout aiding crew endurance is also a multiple world championship winning hull.  Available in a variety of laminate specifications to suit all budgets the hulls are extremely stiff and built down the minimum allowable panel weights under the class rules.